メインコンテンツに移動
This site in other countries/regions:

Why You Definitely Shouldn’t Electrify Your Acoustic Tern Bike

Lots of folks—including many long-time conventional cyclists—are starting to recognize that e-bikes are a good idea. Like, a really good idea. So good, in fact, that some riders are tempted to make their favorite bike even better by adding an after-market motor and battery.

We get it—hilly commutes and sweaty backs suck. Nonetheless, we’re here to tell you that electrifying your acoustic Tern bike is a pretty bad idea (in practice, that is—it’s definitely fun to daydream about).

Of course, we can’t control what you do with your bike once it’s yours. And if you’re the type who loves to tinker and live dangerously, we might be wasting our breath here. But we still need to say our piece, so in this article, we’ll explain why you shouldn't (and we wish you wouldn’t) electrify your non-electric Tern bike.

Before we delve into the potential problems with electrifying your acoustic Tern, there's a central assumption we need to address. The assumption is that creating a good e-bike is an additive process: that is, that you can take a bike you like, add a motor and battery, and get an e-bike you'll like even more.

That's just not how it works. Today's quality e-bikes are precision-engineered machines where all components are optimized to work together—just like cars. At Tern, when we create an e-bike, we know it's going to be an e-bike from the very beginning. All the design choices we make along the way take the "e" factor into account.

Without that process, the resulting e-bike won't ride well. But more importantly, it's very unlikely to pass relevant safety tests. An e-bike's motor adds substantial forces, in new directions, that an acoustic bike's frame and fork weren't designed to handle. For example, adding a front hub would require a massively beefed-up fork to handle the additional stresses safely.

Think of it this way: the car brands Porsche and Škoda are both made by VW. We could research whether it's theoretically possible to take a Porsche engine and stick it in a Škoda—it might be that the motor mounts and engine spaces are compatible. But we wouldn't waste our time on that because there are other problems: namely, the Škoda's chassis, brakes, and suspension aren't designed to handle the power a Porsche motor provides.

In the same way, electrifying your acoustic Tern is unlikely to yield desirable results. Here are four big problems you may run into.

Problem #1: You'll be trading in a great ride for lackluster performance

When riders make changes to their bikes, the general idea is to upgrade them for a better overall riding experience. At first glance, it might seem like electrifying your acoustic Tern is the ultimate upgrade since e-bikes are faster and easier to ride.

But it’s not as simple as all that. Your acoustic Tern bike was designed and engineered to perform best under pedal power only. When you add a motor and battery, you’re radically changing the bike’s center of gravity, weight distribution, and average speed.

You’ll definitely notice changes in the way your bike performs, and you may not like them. It’s unlikely that your bike will retain the same smooth, great-feeling ride you know and love. Instead, you may end up with a bike that rides, well, like a hacked-together e-bike. And you won’t get the optimized range and gearing that makes life with e-bikes so great.

That’s why we encourage you to let your acoustic Tern bike be the best version of itself. If you want an e-bike—and who doesn’t?—invest in a purpose-built one. That way, you’ll end up with two really awesome bikes, instead of one bike that … works, sort of?

Problem #2: Increased maintenance and repair costs may outweigh the benefits

We can already hear you saying, “But purpose-built e-bikes are expensive! I can save money by electrifying my own bike.” But while an e-bike conversion kit might have a lower initial cost than an e-bike, you need to factor in all the additional costs you’ll incur.

First off, there are the costs of getting your after-market motor and battery working reliably. Think fried sensors, melting wires, adapters, and other extra parts … it may cost more than you think to get your e-bike project off the ground.

Next, there are the increased maintenance costs associated with electrifying an acoustic bike. Your bike will be heavier, and your average speed will be higher, so you’ll be putting lots of extra wear and tear on your bike’s frame, fork, and components—none of which were designed to withstand that kind of use. In particular, your bike’s brakes and tires are likely to need very frequent maintenance or replacements (that’s if your tires aren’t constantly deflating on your ride).

Anecdotally, many DIYers eventually get tired of sky-high maintenance bills and frequent trips to the mechanic. They decide to buy a purpose-built e-bike instead, so they can fully enjoy the benefits of e-biking (it’s supposed to make life easier, you know?). We suggest you skip a step and save up for the real deal. 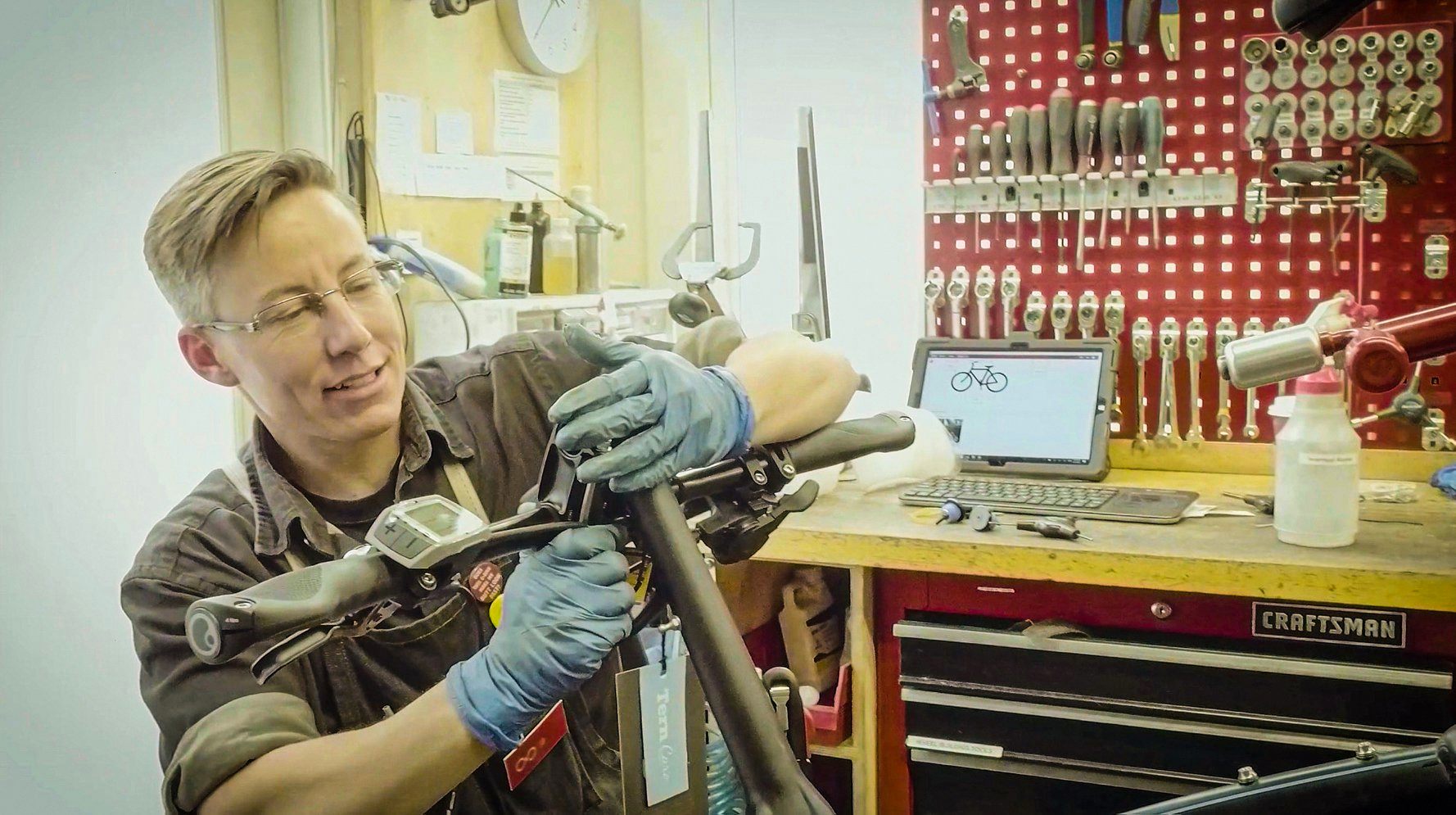 Photo: Courtesy of the New Wheel

We hate to sound lecture-y, but it has to be said: electrifying your acoustic Tern bike poses serious safety risks.

First, there are the risks associated with the “non-e” part of the bike, some of which we introduced earlier in the article. E-bikes require stronger frames and components to handle the extra weight, torque, speed, and stopping forces that electrification produces. All of Tern’s e-bikes undergo rigorous testing to ensure they’re safe and can handle the extra forces.

Of course, we also test our acoustic bikes for your safety, but generally not with the aim of making them safe for e-bike conversions. We've seen the damage that can occur when you add a motor to an acoustic bike that wasn't meant to be electrified—and it's not pretty.

On top of that, these general risks pale in comparison to what can happen with a poorly designed or cheaply made motor and battery system. E-bike batteries are highly combustible. While they can be made safe—as quality manufacturers like Bosch have proven—they can also cause some pretty scary accidents.

For example, in 2019, a man in Adelaide, Australia, was injured when his self-converted e-bike ignited beneath him while he was riding it (the pricey road bike he converted was destroyed). The year before, in the U.S., a man attempting to build a DIY e-bike caused a fire that destroyed his home.

Your safety really is our number one priority, which is why we strongly recommend against electrifying your acoustic Tern.

Problem #4: Say goodbye to your warranty

One last thing: should you decide you're not convinced, and you'd still like to take on all these risks, please know that electrifying your acoustic Tern bike will void your warranty—you’re on your own!

Are there any exceptions?

At the time of writing, no Tern acoustic bike model on the market has been tested and proven safe for e-bike conversions. However, that doesn't mean we'd never make a bike like that.

We're not against doing it yourself and having fun—we just really want to make sure you stay safe and get the most from your Tern bike. If we do have the opportunity to create a bike you can safely convert to an e-bike, we'll be sure to test it thoroughly and then announce it to the world.

The bottom line is, biking is supposed to be fun, and we’d hate to see anyone get hurt or destroy a nice bike trying to get something that can be had better, safer, and probably cheaper. If you want an e-bike, find one in your price range, save up, and keep your acoustic Tern for when you want a harder ride or a smaller fold.

Please, ride safe and enjoy your Tern (the way it was meant to be enjoyed)! ✌️